Thirteen researchers who worked with dilute toxic cultures of Pfiesteria sustained mild to serious adverse health impacts through water contact or by inhaling toxic aerosols from laboratory cultures. These people generally worked with the toxic cultures for 1-2 hours per day over a 5-6 week period. The effects included a suite of symptoms such as narcosis (a “drugged” effect), development of sores (in areas that had directly contacted water containing toxic cultures of P. piscicida, as well as on the chest and face), uniform reddening of the eyes, severe headaches, blurred vision, nausea/vomiting, sustained difficulty breathing (asthma-like effects), kidney and liver dysfunction, acute short-term memory loss, and severe cognitive impairment (= serious difficulty in being able to read, remember one’s name, dial a telephone number, or do simple arithmetic beyond 1 + 2 = 3). Most of the acute symptoms proved reversible over time, provided that the affected people were not allowed near the toxic cultures again. Some of these effects have recurred (relapsed) in people following strenuous exercise, thus far up to six years after exposure to these toxic fish-killing cultures. Moreover, subcutaneous injection of crude toxin preparations from fish-killing cultures have induced serious learning impairment and memory loss in experimental laboratory rats (work by Drs. Levin and Schmechel at Duke University). The discovery, the “hard way,” that Pfiesteria is unusual in its ability to produce toxins which can aerosolize, led to requirements by state and federal officials that all further work with toxic fish-killing cultures of this dinoflagellate be conducted in biohazard level III containment systems in a limited-access facility. These precautions must be followed for any research with live toxic cultures of Pfiesteria. 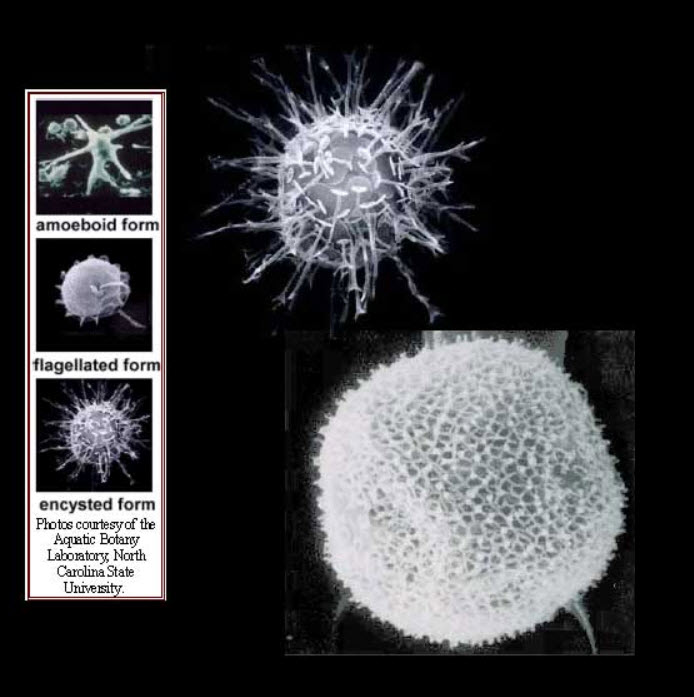 Fish kills and fish disease events linked to Pfiesteria can extend for 6-8 weeks in North Carolina’s estuaries, thus potentially providing the circumstances for humans in field settings to be hurt as the result of exposure to this dinoflagellate’s toxins. However, it will not be possible to determine the extent to which people in our estuaries are being affected by Pfiesteria toxins, or whether it is safe to consume fish from toxic outbreak areas, until we have a way to diagnose the presence of these toxins. That will require identification of the chemical toxins produced by Pfiesteria, which is the subject of ongoing, intensive research.